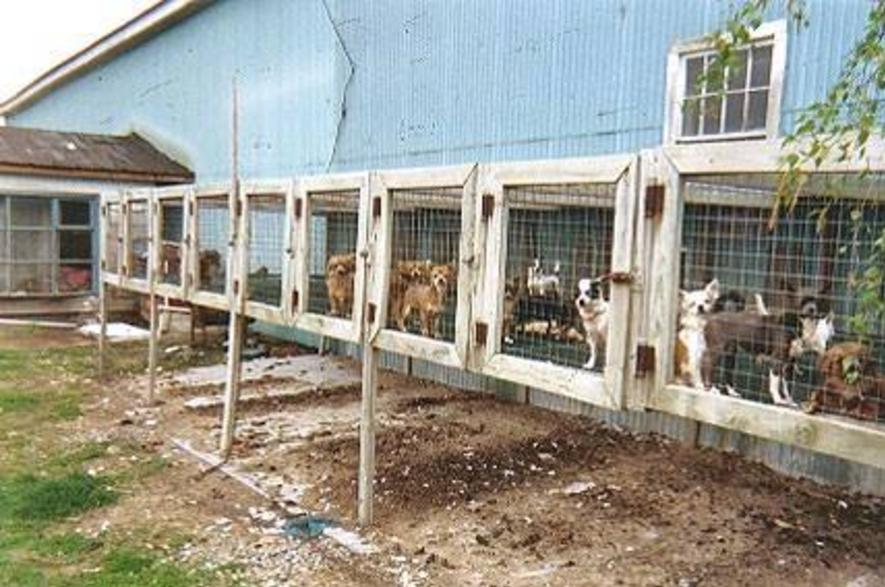 The Amish and Mennonite community are known as "The Gentle People". Amish Country is known for its wonderful restaurants, craft shops and well-kept Amish farms. Beautiful fields where bearded men in wide-brimmed hats lead teams of shaggy plow horses tilling the soil. Hay fields dot the rolling hills of Amish country, and the fields that sustain the simple lifestyle are mostly bare. But one crop the most important crop to some remains: Puppies.

An overwhelming number of puppy mill operators are Amish. Inside the picturesque barns and wooden fences of Amish country in New York State and in all Amish communities throughout the US, "purebred" puppies are bred by the tens of thousands, many living in a hellish world of filthy, crowded cages. They are puppy mill puppies, and they bring in $4 million a year for the over 100 Amish and Mennonite farmers who supply pet stores, boutique dog-shop markets, and at least two New York dog dealers, according to the ASPCA. "It's not just some cottage industry by people who sell bread-and-butter pickles by the roadside," says Roger Caras, ASPCA's former executive director.

These "dog farmers" sell 20,000 puppies a year to wholesalers for an average $223 a pup, government records show. And it's making some of these quaint farmers quite rich. U.S. Department of Agriculture (USDA) documents show that one Amish dog farmer sold 1,293 puppies last year for an estimated $290,000 though federal inspectors have cited his farm for numerous violations since 1992 including overcrowded cages and inadequate sanitation, pest control, feeding and watering of animals. Then these sickly, genetic nightmares are delivered to the upscale pet shops. They give them a bath and blow dry them and fluff them up and pray they don't die before they're sold, often for $1,000 or more each.

The Amish don't say much about their involvement. They never do. No one at the local seed store would talk about puppy breeding last week. Or at the buggy maker's. Or at the lumber yard or the pet store. Not even at the corner restaurant. It's their dirty little secret.

Be warned though- the Amish life that is depicted for tourist is nothing like the reality. A simple Google search for Amish puppy mills will return thousands of hits. For farmers, a big crop of dogs can gross up to $500,000 annually, with successful operations netting six figures. For critics, the men in the suspenders and bushy beards are masking a cruel form of factory farming behind the quaint and pure image of the Amish culture.

According to Baker, even shipping a pup a week later, at eight weeks of age, is not a good idea. "Immune systems aren't developed by then and all kinds of health issues could arise."

In areas of the U.S. where Amish dwell, there is a high number of puppy mills. The Pennsylvania Bureau of Dog Law Enforcement lists 243 kennels in Lancaster County. Pennsylvania, 98% of them owned by Amish. Holmes County, Ohio, has 470 kennels -- more than any other county in the nation. While the Amish landscape is among the most beautiful in the world, the puppies bred at the mills NEVER see the outside of wire cages that are usually stacked on top of each other in dark barns.

One cannot throw all the Amish into the same category. Actions of some might sound rash. The puppy-mill breeders might be just a small fraction or a very small percent of the Amish population, but the majority of the population have chosen to ignore what is going on in their own backyards.

The Amish have been allowed to continue their inhumane treatment of animals without pressure from the rest of the population because of the money that tourism brings to Amish businesses. Most people who visit Lancaster County, Pennsylvania and Holmes County, Ohio go there to experience the Amish Culture. Yes, the Amish in general are a hardworking, modest people. But they use the modern world to advertise and post the mill puppies on the Internet. These Godly people who shun the outside world have no qualms about using an outside third party to sell their stock.

The Amish continually breed poor quality puppies and keep their breeding dogs in a state that defies decency. They should be barred from dog breeding as they breed poor quality dogs. They get away with it because people think that religious people would never do anything inhumane.

The following pictures were taken with permission of the Amish owner. All these dogs have been in wire cages all their lives, live totally confined to these spaces, receive no vet care and have deformed paws.