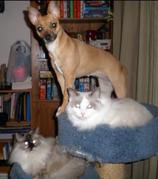 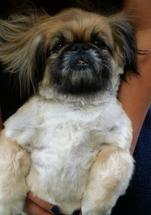 My husband and I have owned five Pekingese now with our latest addition this past January 2015. Two were bought from a pet store... Before I was educated about puppy mills.  Next; I'd like to explain that rescue dogs and dogs with disabilities have great possibilities!
After my Micky and Leo crossed the rainbow bridge both in 2014 due to medical reasons I thought my heart would remain empty. It took a good year to go through with the idea of getting another Peke. Would they treat Fidget with kindness ? Fidget is my littlest peke with some special needs .
Would I love again as much as in the past?  These were only some questions I had rolling through my mind.

I began my search on petfinder.com. I saw Reina, looked into her bio, and thought about her over the next day. She looked so adorable online. Hm  ? Mini Mutts rescue who are they? Turns out they are truly dedicated people. I applied for Reina and was approved! Although that shouldn't have been a surprise it woke me up and I can have my peke loves again. My heart was overjoyed!

Meeting Reina.. Foster mom Jutta full of love for those in her care truly loved Reina. New Years Day 2015 my oldest and I were granted permission to come meet Reina and we visited for quite some time.  I am so happy for rescue. Reina's every bit of Peke I could ask for.  She's got nipples that hang from multiple litters but who cares, she's so loving ! She jumps in the shower with husband and I and around fourth of July loud noises spook her! We laugh. 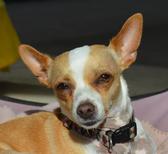 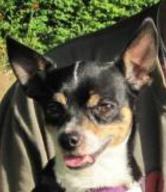 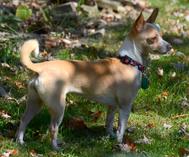 In November of 2008, as I was about to close on the purchase of my first home, I knew I needed a dog. I was a single female about to be living in the country and only had cats as pets. I checked out Petfinfer and saw Junie B. listed through Mini Mutts Rescue. I was looking for a Chihuahua as I had always wanted one and  I instantly fell in love with her big ears and cute face. I met her at her foster Mom Kara's house and felt like she was the one. She came home approximately 2 weeks later. I was still living in my apartment so that presented a problem: my landlords knew I was leaving but they didn't know I had adopted a dog. I had sent Carla pictures of my new home so she knew I was moving and would be allowed to have Junie. Junie B was renamed Gracee. Gracee couldn't be left alone. She had severe separation anxiety and was afraid of everything. I had about 3-4 weeks left in my apartment and worked 3rd shift. I was able to take Gracee to work with me for those 3 weeks as I worked in a group home for teens who had drug/alcohol issues and/or mental health issues. Many of those kids didn't have families and those who did, often had pets they had to leave at their home while they were in placement. Those teens helped Gracee become more socialized and she slowly came out of her shell. She would play with the residents and would come with me to do bed checks. The kids looked forward to her visiting and she looked forward to going with me every night I worked. I moved to my new home and while my parents and I were moving a load of stuff we had left Gracee at the house. She escaped from her cage and pooped on my brand, new house carpet. Once she fully settled in, she became the most loving, sweet girl. She stayed by my side 24/7 and went everywhere with me. It took about a year before she became less afraid of being left alone and she had some belly issues at first but I refused to give up on her. Today, she continues to be my constant companion. She is very loving, has a super disposition and she loves everyone she meets. She is social around other dogs and displays a great demeanor around my two step children who adore her. I'm so glad I rescued her, but in reality, she rescued me. After I adopted her, I did foster for Mini Mutts Rescue and two of my foster dogs are with people I know. My aunt has one of my foster dogs and my aunt's son's best friend has another dog that I fostered. I hope to someday be able to foster again for Mini Mutts Rescue. 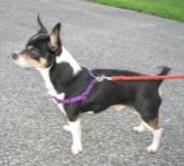 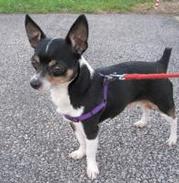 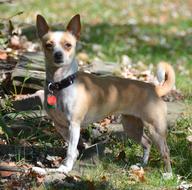 My Chihuahua rescue courtesy of MiniMutts Ohio
A few years ago I fell in love with the Chihuahua breed.  Watching the movies Beverly Hill’s Chihuahua and the sequels did not make it easier to avoid the temptation of buying my own Chi.  I have a Golden and wanted a play friend for him and well...
I started searching online and ran across ridiculous posts from what appeared to be puppy mills and even went in person to meet several candidates.  I was appalled by the conditions of many of these adhoc breeders.   I was prepared to buy from a professional licensed breeder in another province until I saw the cost ($4500 approx) and so went back online searching on “Petfinders” website.    After several months, none caught my attention.
I admittedly was concerned about adopting from a rescue.  I thought “what if it’s aggressive” or “what if it had such a bad and horrific life with previous owners” and “what if it would be miserable here and just destroy and pee/poo everywhere.”   I thought of everything that could go wrong.  SO I stopped searching.   After several months, I couldn’t resist anymore so I wondered back online and came across a few rescue websites (where upon investigations appeared to be breeders).  Frustrated, I decided to give it one more try and then forget about it.  The moment I decided to quit, a name caught my eye.
I like the name, “Isaiah” and decided it was a sign from above and needed to explore this rescue.  I saw his photo and fell in love instantly.   And then I noticed that the little guy was way in Ohio.  I was disappointed because the original ad noted, Toronto (Ontario).  I emailed a few times and as soon as it was confirmed that he’d been transported from Ohio to Toronto I had to go see him.   At first sight he ran toward me and jumped and was the happiest little fellow ever.   All my concerns about adopting a rescue fell by the wayside.  I returned the next day with the cheque, headed straight to the pet store and then home.
When I opened my front door he ran up the stairs, straight onto my bed chasing all the cats off and sat like a king in the middle of it.   At that moment, somehow dog cuties on my bed no longer mattered.
He now lives the life alongside the rest of my little troopers  (all rescues) and my Golden (with whom he cuddles on cold winter nights).   There is power and might in one little four legged bundle of joy.  I believe he was sent from above.  His name started it.                From, Li 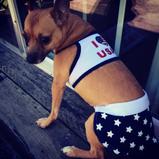 ​
I first encountered Mini Mutts through a listing for a female chihuahua on Petfinder.  My request for additional information from Mini Mutts was answered promptly and thoroughly.  Through the course of my email conversation with Carla (founder of Mini Mutts) and the dog's foster mom, we realized that the dog we were inquiring about would not suit our family situation.  I gave my reasons to Carla and told her we were no longer interested in the dog and we were prepared to continue looking for the right dog.  Carla was very understanding, but instead of letting us "walk out the door," she suggested another Mini Mutts dog that she though might meet our needs.  Carla got the second dog's foster mom involved in the conversation and we discussed this dog's personality and how she would suit our family situation.  We ended up applying for, meeting, falling in love with and adopting the second dog, who we named Aubrey.
Throughout our entire interaction with Carla and the foster moms of Mini Mutts, it was obvious that their top priority is the safety and happiness of the dogs in their care.  But it was also clear that they understood how important it is that we be happy with the adoption relationship -- unhappy adopters mean an unhappy dog and a failed adoption.  We appreciate the time and energy Carla and the foster moms took to ensure the well-being of their dogs and to make sure we got the right dog for us.
Sweet little Aubrey has quickly settled into our household.  She has been gentle with our cats and patient with our other dogs.  We are delighted by her energetic personality, eagerness to please, and sweet disposition.  At this point, it is hard to remember what life was like before we met our Mini Mutt.